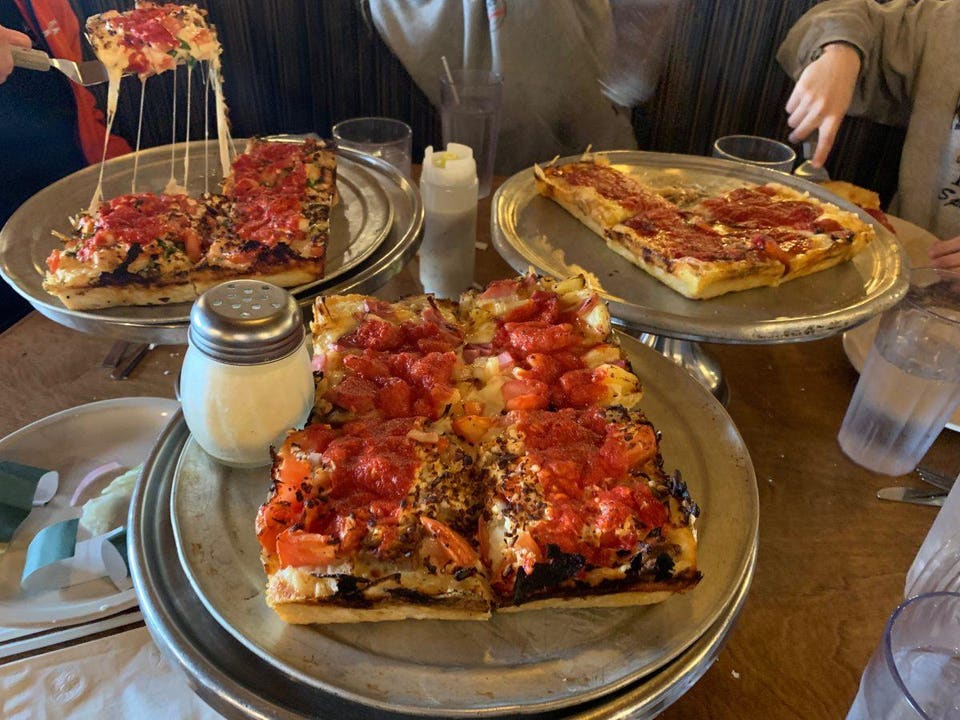 Visitors to Chicago love trying our city’s deep dish-style pizza. Similarly, I seek out New York City-style-pizza whenever I visit NYC. New York City’s hand-tossed and thin crust is often sold in such wide slices that pizza lovers curve it like a taco shell to enjoy. Since I was heading to Detroit this weekend, I wanted to try Detroit-style pizza straight from the city in which it originated. Did you know Detroit-style pizza is rectangular and features a thick crust and crispy bottom and usually loaded with toppings like pepperoni and mushrooms?

Chicago’s deep dish-style pizza was reportedly invented at Pizzeria Uno but cultural historians admit that not enough documentation exists to confirm this theory. What sets this pizza pie apart from all others is its very deep crust which really does resemble a pie more than a thin crust pizza. Baked in a round and steel pan, the dough presses against the sides and forms a pie shape perfect to hold its very thick layer of toppings.

New York City-style pizza, on the other hand, has a really thin crust that helps it fold. It’s still crispy and is often topped with tomato sauce and mozzarella cheese. Without any toppings, it’s called plain, regular or simple cheese. It’s hard to walk through any neighborhood without having the option to buy a huge slice or an entire 19” pie, usually cut into eight slices. While they used to be cooked in a coal-fired oven, most joints now use a regular gas oven.

Since I was in Detroit this weekend, I asked a local for a recommendation. My source told Niki’s Pizza in Greektown wouldn’t disappoint so off we went to Niki’s.

“Nikoletta (Niki) Kefallinos was born June 1, 1926 on the island of Zakynthos, Greece,” a plaque honoring the restaurant’s namesake prominently next to the entrance reads. During one of her visits to Detroit from Greece, one of her sons opened his first restaurant and named it after his mother. There isn’t much in the way of why Detroit-style pizza was its focus but I was excited to try the pizza.

My family and I ordered a few different types of pizza as well as the Greek salad. The Greek pizza, Detroit-style, is rectangular in shape and cut up into square slices. Delicious warm feta grazed the pizza which also featured cooked onions, tomatoes and spinach. The Mediterranean pizza included the same as the Greek pizza but with the addition of chicken. We also ordered the typical cheese and a cheese and pepperoni. One slice is plenty but we ordered two smalls and one large and had way too much food for a party of five.

It’s always fun to try new foods whenever we travel and I’m glad we trekked to Greektown to try Niki’s Pizza. Do you have a favorite pizza style? I’d love to hear it!