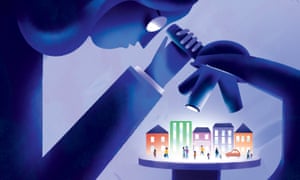 For days now, the list has been growing in my head. All the meetings, all the working coffees, everyone I bumped into in the street over the last week or two. The dinners with old friends, the book launch party, the kids’ sleepovers, the dog walks with neighbours and cups of tea made for the builders. Even a boring middle-aged life, living in the country and working much of the time from home, is more sociable than it looks.

And although I stopped shaking hands with interviewees 10 days ago, to avoid any chance of passing on a virus I almost certainly don’t have, even Lady Macbeth-like levels of hand washing suddenly don’t feel quite socially responsible enough. Never mind “dancing like nobody’s watching”, as the twee motivational quotes have it; “living life as if an NHS contact tracer is counting how many people you’re breathing germs over” suddenly seems a more appropriate motto.

Nobody should be blamed for unwittingly infecting others, obviously; we’re all in this together. But we are entering the next stage of coronavirus now, where life will change and perhaps dramatically. Diaries will empty almost as fast as train carriages, as all but essential meetings are scrapped. But that’s just the beginning, as the shutters come down all over Europe. We may be entering a grim, involuntary social experiment revealing which everyday habits and practices we’d miss if they were gone, and which could be swept away surprisingly easily.

This week Jenny Brown, the head of City of London School for Girls, called for private schools like hers to dump GCSEs in favour of interesting project work that doesn’t turn the already anxious teenage years into a pressure cooker. Crazy idea? Teachers already struggling to motivate reluctant pupils, even with the threat of exams, may think so; and it could be disastrous for less academic kids whose highest academic qualification will be a GCSE. Yet if the worst case infection scenarios come true, then by mid-May squeezing thousands of children into exam halls might make no sense.

It’s no longer unthinkable that this year’s exams might need to be scrapped or postponed, and suddenly an argument that has been going round in circles for years about whether testing at 16 really makes sense – because ultimately ditching it always feels like too much of an upheaval, unfair on the children who would become guinea pigs – changes. We may be entering an era where things that once seemed impossible, become almost impossible to avoid.

Sadly for the theory that crises are opportunities in disguise, the changes that may be coming won’t always be benign or within our control. A major coronavirus pandemic may mean social consequences we never foresaw and painful shifts away from economic models on which many jobs depend – on top of the deaths and suffering the virus itself will bring. But this crisis could end up being less like the banking crash and more like a war, an event throwing everything high enough into the air that some of it never returns to Earth.

Women taking over men’s work in factories and offices was meant to be a sticking plaster solution to get us through the second world war, but when the fighting was over women balked at returning to narrow domestic lives. Rationing was just a pragmatic response to food shortages but it accidentally created a giant control group of children all raised on the same diet, whose health outcomes obesity researchers would study for decades to come. Wartime desperation accelerated the development of everything from antibiotics to radar to sexual health services free at the point of need, years before the NHS was established (it was a first world war outbreak of venereal disease among soldiers that led to the setting up of the first clinics in 1916).

Since few in 1939 would have predicted a movement for women’s liberation, all predictions of how this outbreak will change us should be taken with a bucket of salt. But ideas long parked in the “too difficult” box may begin breaking out of it.

After the 2008 banking crash, some firms of City lawyers or accountants whose work had abruptly dried up started asking for volunteers to work four-day weeks and take a pay cut. Part-time work went from being seen as something only working mothers did, to a heroic gesture men could also feel good about; when the crisis passed, some chose to stick with the new working pattern.

What stops most people taking Fridays off now is that they can’t afford to earn less, while most employers can’t face reorganising the whole office to pack the same work into fewer, more productive days. But some companies facing a catastrophic slump in demand are already pleading for volunteers to cut their hours, while others will end up making radical changes to the way they operate in order to cope with the numbers going off sick.

If the need to share work around during the Great Depression helped kill the six-day week, this virus may knock another brick out of the wall of Monday to Friday working. And how many of those cancelled meetings, or mothballed conferences, will be actively missed?

The existing shift from an analogue world to a digital one will surely speed up too. Rather than risk exchanging germs, we’ll shop online, FaceTime the grandparents instead of visiting, pay electronically rather than handle cash, stockpile ebooks for long dull days indoors.

Politics, too, will change. There has long been stiff resistance in parliament to letting MPs vote electronically from wherever they happen to be; only after a heavily pregnant Tulip Siddiq was pushed through the lobbies in a wheelchair were proxy votes for new parents reluctantly granted. But keeping elderly peers cooped up in the House of Lords seems almost irresponsible now, and e-voting could be the safest way of passing legislation in an epidemic. If it works, then can it be long before the rest of us are voting online in general elections, not walking to polling stations?

And if all this sounds like a lonely, antiseptic way of living, then perhaps it will also make us appreciate the human contacts that matter. My son was longing for school closures until his teachers explained that the contingency plan is to set daily lessons online instead; all the same grind, but no break times with your friends (and no staffroom camaraderie).

What we will miss most in a crisis, I suspect, is each other. But don’t be surprised, when things eventually return to normal, if it isn’t quite the normal we knew.