The basketball shoe free-agent market has heated up with the news that Miami’s Jimmy Butler has ended his relationship with Nike’s Jordan Brand. Photo from @GregSylvander (Twitter).

The NBA sneaker free-agent market heated up this week with the news that Jimmy Butler has opted out of his long-term deal with Nike nine months early. While the Miami Heat star reportedly plans on hitting the court sporting a variety of different brands in the short term, New Balance has emerged as a strong favorite to ink Butler to his next sneaker endorsement deal, sporting short -110 odds in NBA special betting at BetOnline.

Selected 30th overall in the 2011 NBA Draft by the Chicago Bulls, Butler signed his first shoe deal with Adidas during his rookie year. Three years later, he signed with Nike’s Jordan Brand, reportedly taking a substantial cut in endorsement revenue to go into business with a brand that he had a long relationship with, dating back to his youth. 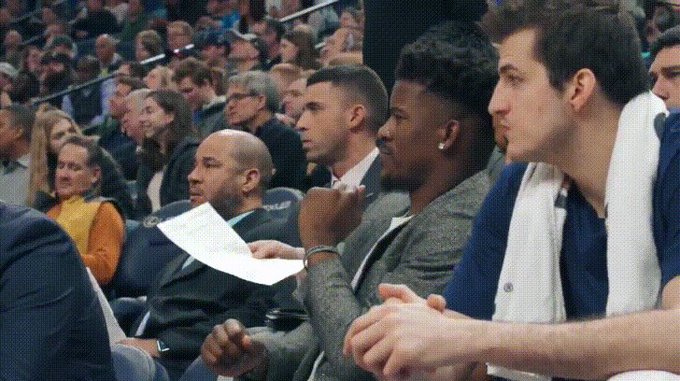 Butler has blossomed into an NBA star during his time with Jordan, earning NBA All-Star honors on four occasions and being named the league’s Most Improved Player in 2015. But with Jordan turning its attention to a more youthful market through its deals with Zion Williamson and Luka Doncic, it became clear that it was time for the 30-year-old Butler to move on.

New Balance could represent a good fit for Butler. The brand has made plenty of noise since its recent return to the basketball sneaker market, pursuing the likes of Joel Embiid and Gordon Hayward with attractive offers.

Indeed, the brand landed the biggest sneaker free agent of 2019 with the signing of Kawhi Leonard, who provided New Balance with plenty of bang for its buck while leading the Toronto Raptors to their first-ever NBA title.

With Leonard one of just three players currently under contract with New Balance, opportunity exists for Butler to have a real impact on the expansion of that brand, something that became increasingly unlikely at Jordan

With Leonard one of just three players currently under contract with New Balance, opportunity exists for Butler to have a real impact on the expansion of that brand, something that became increasingly unlikely at Jordan.

However, New Balance is not alone among burgeoning brands in the lucrative sneaker market space. Dwyane Wade reportedly played an important role in Butler’s decision to sign with Miami as a free agent last summer, and could now be instrumental in a bid by Chinese sporting goods company Li-Ning in its efforts to bring Butler.

Like Butler, Wade parted ways with Jordan after a three-year relationship, and has since become the most-prominent NBA face in the Li-Ning stable. Wade also encouraged Butler to sign with the Heat, feeling that Butler would fit well into the team’s culture.

Since joining Li-Ning in 2012, Wade has received his own signature shoe, something that Butler never received from Jordan. Both Adidas and Puma, which lag as +400 and +500 longshots, have the budget to bring Butler into the fold. However, he has previously demonstrated loyalty to people and brands that he has a connection with, meaning Butler’s relationship with Wade adds considerable value to Li-Ning as his next sneaker destination.
[“source=sportsbettingdime”]