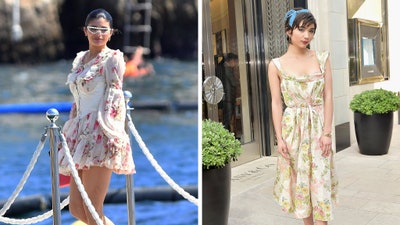 Kylie Jenner and Rowan Blanchard aren’t two names we are used to seeing next to each other. Kylie is an L.A. billionaire-businesswoman who runs her own makeup and skin-care line, all whilst being majorly influential on social media. And Rowan is an actress who got her start in Disney flicks and, most recently, starred in A World Away. But the two, both bonafide stars in their own right, have one thing in common: their love of milkmaid fashion. Milkmaid fashion has a distinctly 18th-century European peasant feel to it. Think: ruffles, puffed sleeves, with slender bodices. Or, just visualize a painting by Johannes Vermeer.

On Wednesday, Kylie posted on Instagram a couple of snaps from her birthday travels in the South of France. In the photos, she’s wearing a floral ruffled dress with a white satin corset over top. The look was, fittingly, very French milkmaid from the 1700s. Of course, Kylie topped the outfit with a contemporary spin: Gucci futuristic specs that were outlined in pearls. The outfit was super feminine and cute, while the corset gave it a nice touch. “The highly feminine milkmaid dress says, ‘I’m a down-to-earth country girl,’ while the pearl embellished sunglasses denote a surfeit of luxury,” W magazineacutely notes. If you’re considering copying Kylie’s look (we are) a fan blog dedicated to decoding Kylie’s closest identified the dress as a piece from Duygu Ay Collection.

Kylie isn’t the first star to partake in the milkmaid look. Rowan’s been rocking the corset-over-a-dress for months now. We may even go as far as to say it’s one of her signature looks. In May, Rowan layered a denim corset over a metallic-pink Batsheva dress. She looked positively adorable while posing on the sidewalk. At the Moschino runway show in June, Rowan took an edgier approach to milkmaid dressing, wearing a two-piece rococo-print fit with platform heels. Plus, in June, Rowan’s now-famous denim corset got its return. Rowan posted an OOTD pic onto Instagram wearing a yellow gingham dress under the denim corset, which she adds she found for $20. As we said, the corset is one of Rowan’s signature looks.

Earlier this summer, Vogue asked, “Why Not Wear Your Favorite Lingerie Out and About This Summer?” The article recapped the newfound trend of wearing your undergarments as outer garments, which feels like a prediction to the corset-wearing milkmaid trend we’re now seeing. If you’re not fully ready to take the leap to wearing your underwear over your jeans (understandable), may we suggest some milkmaid-fashion alternatives?

All products featured on Teen Vogue are independently selected by our editors. However, when you buy something through our retail links, we may earn an affiliate commission.