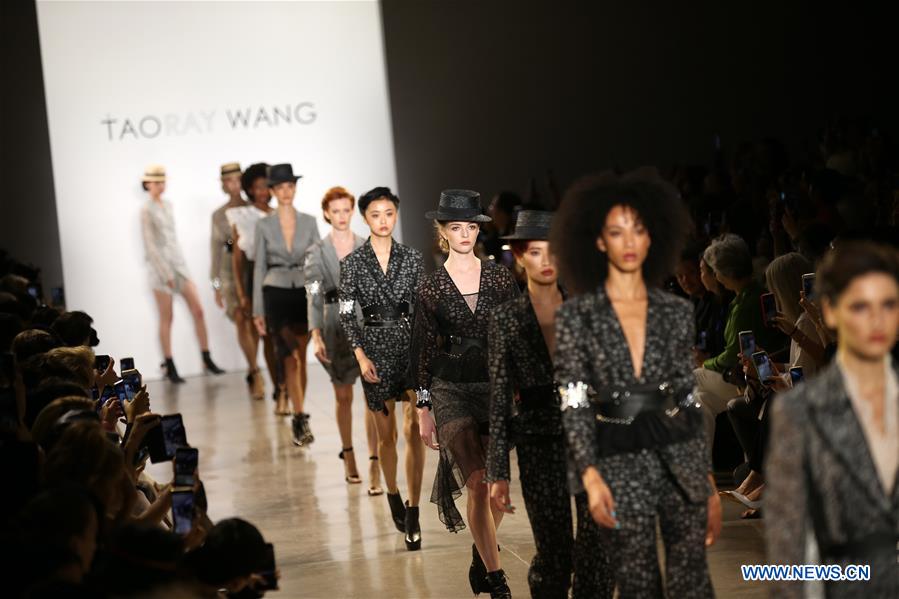 The collection is inspired by Sidonie-Gabrielle Colette, the renowned 20th century author, who was an independent and fearless woman living in the war era, Wang said on the sidelines of her namesake brand Taoray Wang’s runway show.

Wang said Colette grew from a girl in Burgundy who dressed for the countryside to become an exquisite Parisian lady who dared to break taboo by wearing a three-piece suit in public. She admired Colette for her pioneering spirit and incorporated such attitude into her designs.

Wang, known for her flair in using basic colors such as grey, white and black to create elegant and confident looks for career women, challenged herself by introducing pastel colors and feminine fabrics into her designs in the latest collection.

Some 38 looks were presented at the show, in which fresh mint green meets classic black and white, lace collides with cashmere, delicate falbala greets hard stripes, and off-the-shoulder contrasts with punk elements.

Through the intense contrasts in color, pattern, decorative elements, and fabric, Wang wanted to deliver a message, namely women should and could have an attitude in fashion and in life.

The show received an extensive round of applause from audience as many felt it was a breakthrough for Wang.

Amy Zhang, a long-time client of Taoray Wang, said unlike the previous collections in which lace could only be seen occasionally, the new collection used the soft and sexy fabric extensively. By introducing those feminine fabrics and colors, the designer told a personal growth story and really showed a women can do anything.

The previous collections present how a woman should be whereas the latest collection shows what a woman has become, so the empowerment message is more pronounced today, said Zhang, partner and portfolio manager of Fred Alger Management.

Wang, a graduate of East China Normal University in Shanghai, has grown from an aspiring designer to one of Asia’s most successful female entrepreneurs. Since her brand made its debut in the fall of 2014, she has become a regular at the New York Fashion Week.

Held in February and September, the semi-annual event is one of the four major fashion weeks in the world, collectively known as the “Big Four,” along with the Paris, London and Milan fashion weeks.