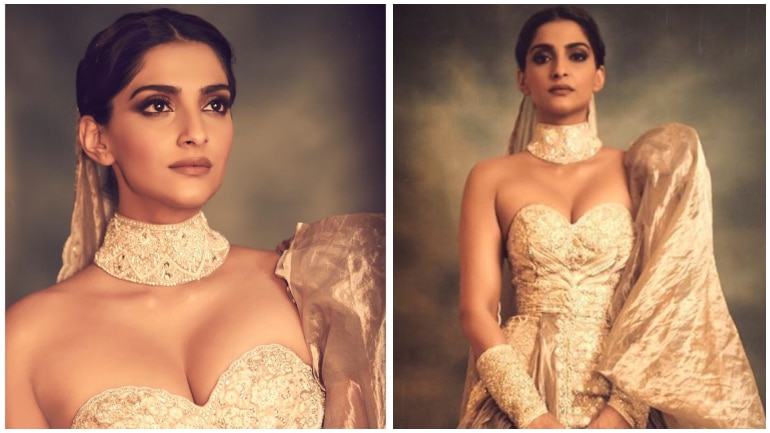 Sonam Kapoor Ahuja is living the best life at the ongoing Cannes Film Festival 2019 and slaying the best looks.

Bollywood’s OG fashionista, yesterday, released two back to back gorgeous looks, giving us once again some of the best fashion moments at Festival de Cannes.

Giving us a modern maharani moment for her third look, Sonam represented Indian pride at the French resort town in a gorgeous cream and golden figure-hugging couture gown that gave off saree vibes with the pleats.

The strapless dress was by designer duo Abu Jani Sandeep Khosla, which celebrated the iconic nature of a cinematic goddess. The iconic look was styled by her sister Rhea Kapoor.

Her ethereal gown featured a constructed silhouette with fabulous drape, extending from her right sleeve and then tucked delicately on to her hair.

According to the designers, the ensemble pays homage to the actor and to the Cannes Film Festival.

She glammed up her look with smokey eyes with a light hint of kohl, dewy make-up and nude lips.

This look by far has been sonam’s standout ensembles at the Cannes 2019 and we can’t wait to finally see her arrive on the red carpet.

For another look, she wore a violet Elie Saab gown, which featured an exaggerated bow on the neckline that continued down her sleeves.