The fashion show has always been performative, from Paris’s couture salons that hosted seasonal collections in the early 19th century, to the New York Fashion Week showcases that sprung up in downtown lofts and abandoned industrial buildings during the 1980s.

The point at which the full-blown fashion show arrived, though, is more difficult to pin down. The designers emerging from London in the 1990s — most notably Alexander McQueen and John Galliano — recognised the potential of a show as more than just a platform to sell clothes. Crafting immersive experiences that included dance, music and cinema, they set the template for the theatrical shows that we see today.

From John Galliano’s operatic extravaganza for Dior spring/summer 1998 to Kerby Jean-Raymond’s celebration of black music history for Pyer Moss spring/summer 2020, Vogue recalls some of the greatest fashion show performances ever.

Dior haute couture spring/summer 1998
There was nowhere that John Galliano could express his love of theatricality as much as he did at Dior. For his spring/summer 1998 show, Galliano took attendees on an operatic flight of fancy, staging the show on the grand staircase of Paris’s historic Palais Garnier opera house. Featuring an orchestra, tango dancers and dozens of extras dressed as figures from the world’s greatest operas, it was Galliano at the height of his dramatic powers. 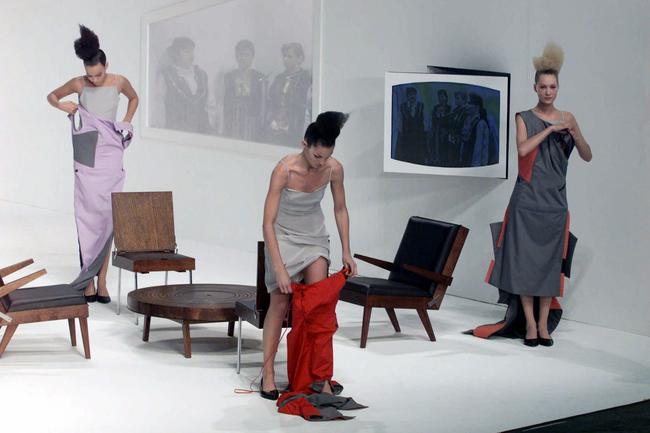 Chalayan autumn/winter 2000
Hussein Chalayan’s interest in the relationship between the human body and science has led to some of the most inventive runway shows ever staged — fittingly, most often at the legendary London dance venue Sadler’s Wells. Take his autumn/winter 2000 show, where models transformed chairs into dresses and a coffee table into a hooped skirt. It went beyond fashion, becoming a breathtaking piece of physical theatre in its own right. Alexander McQueen spring/summer 2004
Few shows are as memorable as Alexander McQueen’s 2004 Deliverance collection. Based on Sydney Pollack’s 1969 classic They Shoot Horses, Don’t They?, a story of young dancers growing up in Depression-era poverty, McQueen enlisted professional dancers to deliver an evocation of dancing themselves to death, culminating with Karen Elson in a ragged dress being carried, as if lifeless, across the stage; all choreographed by contemporary dance maestro, Michael Clark. With its echoes of burnout within the fashion industry, it carries a poignant significance today given McQueen’s suicide six years later. Chanel spring/summer 2012
The concept of the fashion show as spectacle filtered up to some of the world’s biggest brands (and biggest budgets). None were willing to flaunt the wealth of their multibillion-dollar juggernaut like the late, great Karl Lagerfeld. His heavily themed runways, typically held in Paris’s Grand Palais, took showgoers to Chanel-branded supermarkets, protest marches and airports. He also wasn’t one to miss a trick when it came to the storytelling power of music. His 2012 under-the-sea fantasia concluded with Florence Welch emerging, Venus-like, from a clamshell in a pearly white couture gown to sing her track, What the Water Gave Me. Rick Owens spring/summer 2014
For something a little more subversive, look to Rick Owens: whether blasting out plumes of coloured smoke to obscure the runway, or literally strapping models to other models’ backs, the designer’s weird and wonderful concepts have become his calling card. For his spring/summer 2014 Paris show, he enlisted a step team — a blend of military drill and cheerleading from Historically Black Colleges and Universities (HBCUs) — to perform. Here, Owens introduced corners of the performing arts that have been historically overlooked to an entirely new audience, making an effort to shift outdated cultural stereotypes in the process. Opening Ceremony spring/summer 2017
Humberto Leon and Carol Lim have always embraced the world of dance with open arms; who can forget the iconic Spike Jonze-directed Kenzo fragrance ad from 2016? The following year, they presented their spring/summer 2017 collection for Opening Ceremony, with a Justin Peck-choreographed dance piece that channelled a similarly frenetic spirit. Staged just four days after Trump’s inauguration, the furiously defiant moves of the performers felt politically charged and anarchic. Moschino resort 2019
The relationship between fashion and performance can also serve as pure, camp entertainment — and nobody understands the unbridled joy and frippery of camp more than Jeremy Scott. Look no further than the circus-themed pageant Scott staged in Los Angeles for the Italian house’s resort 2019 collection. Embracing his role as ringleader in all its razzle-dazzle tackiness, the finale saw circus performers (along with RuPaul’s Drag Race star and burlesque performer Violet Chachki) finish with a show-stopping aerial acrobatics routine. Dior spring/summer 2019
Maria Grazia Chiuri’s unapologetically feminist vision has seen her celebrate powerful female artists and performers from across the globe; from Nigerian writer Chimamanda Ngozi Adichie to Mexican rodeo horseriders. For spring/summer 2019, Chiuri turned her gaze to the Israeli choreographer Sharon Eyal, founder of the Batsheva Dance Company. The designer’s regular muses — Ruth Bell, Adesuwa, Selena Forrest, among others — weaved across an expansive, petal-strewn set, as dancers shimmied in tribute to the legendary American dancer Martha Graham. It was a refreshingly feminine take on the often aggressive, alpha-male energy of a catwalk spectacle. Gucci spring/summer 2019
Elton John, Stevie Nicks, Courtney Love: the broad roster of rock icons who have aligned themselves with Alessandro Michele’s maximalist vision for Gucci is a testament to his all-encompassing appeal. So, when staging the brand’s spring 2019 Paris show in the restored historic Le Palace theatre — all as part of a three-season tribute to French culture — who better to take the mic than the first lady of French style, Jane Birkin? During an intermission between models filing through the auditorium, Birkin performed a soulful version of her 1983 song Baby Alone In Babylone; only Michele could pull the strings to make an iconic moment in music history happen as part of a fashion show. Raf Simons autumn/winter 2019
From his younger years scouring record stores for Peter Saville-designed British post-punk LPs, to his Kraftwerk-inspired collection for his own-brand label and his collaborations with the Andy Warhol estate at Calvin Klein, Raf Simons has always looked outside fashion to build his unique constellation of references. And for his autumn/winter 2019 menswear show, Simons chose have a young Belgian rock band, Whispering Sons, perform live as the soundtrack to the show. It was a generous act of paying back his debt to punk music by giving a platform to an emerging band. Pyer Moss spring/summer 2020
Since he co-founded the Tabernacle Drip Choir in 2015, Kerby Jean-Raymond has used his runway shows for Pyer Moss as a showcase for the ensemble’s extraordinary talents, with their setlists covering a mix of gospel, hip-hop and blues. But while the group’s numbers have fluctuated across the years, for Jean-Raymond’s return to New York Fashion Week after a season off, he decided to return with a bang: this time, there were 90 members, riffing on the history of black music from Donny Hathaway to Cardi B. Most notable, however, was his tribute to Sister Rosetta Tharpe, the black female gospel singer popular during the 1930s and 1940s, who is often overlooked in her contributions to rock’n’roll. Jean-Raymond might have been looking to the past, but with his celebration of the black music and its relationship to style, this year he made history, too.